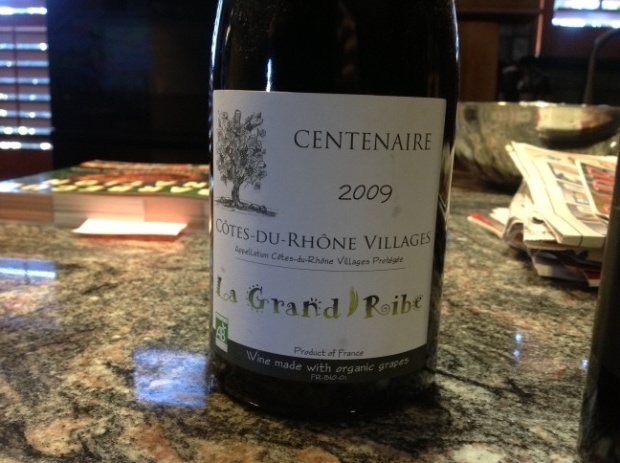 Value Wine: Amazing Value from the South of France!

Although we have extolled the virtues of classic French wines in other Chapters, we have yet to focus upon wines from the Cotes du Rhone appellation of southern France.   That trend will end with this month’s Value Wine No. 1, a terrific Grenache and Syrah blend:   the 2009 Cotes du Rhone Village Cuvee Centenaire, Domaine La Grand Ribe. This classic Rhone blend can be had for about $17, and it has received universal acclaim from the likes of many reviewers including Josh Farrell of Wine Express and Robert Parker.  The latter critic gushed the following praise:  “The blockbuster 2009 Cotes-du-Rhone-Village Centenaire tastes more like a Chateauneuf du Pape…the wine possesses great intensity, a terrific texture, full-bodies power and wonderful purity…this sensational effort is filled with red and black fruit, roasted herb, barbecue smoke, meat juice and bouquet garni characteristics….”    Mr. Parker bestowed a salty 91-93 rating on the 2009 Cuvee Centenaire, comparing it to a classic Rhone which costs 3-4 times more.  If you haven’t treated yourself to a French Grenache and Syrah blend, this is an excellent opportunity.  I am thinking this would pair beautifully with a roast lamb or pork.  Get it while you can at this price!

CHAPTER 12: WINE BUYING FOR YOUR PARTY