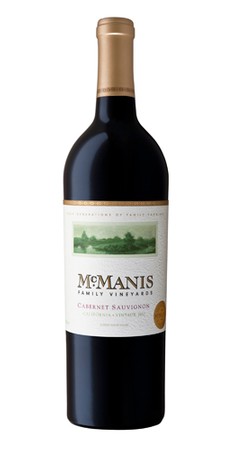 In today’s world of pedestrian bottles of Napa Cabernet Sauvignon that run nearly $100, it is indeed a delight to find a Big Red that one can enjoy as an everyday pizza wine or one that stands up to juicy grilled New York strip for literally a fraction of that price.   Sound too good to be true?  Please allow us to introduce you wine sleuths to the delightful McManis 2013 Cabernet Sauvignon (California).  McManis sources grapes from throughout the State of California for this Cab blend, rather than relying solely on the dearly priced grapes of Napa Valley.  The McManis 2013 Cabernet is an elegant, full-bodied offering that is pressed and finished in stainless steel tanks, and then aged for approximately 6 months in new and used French and American Oak barrels to add complexity.  The McManis Cab contains light oak flavoring that enhances but does not overwhelm the dark fruit, cherry, mocha and hints of spice.  The McManis beauty has a round, lingering finish that belies its modest price point.   Wine Enthusiast was apparently equally impressed, naming the McManis 2013 Cabernet Sauvignon as number two on its recently released Top 100 Best Buys 2015 while bestowing a solid 90 rating on the wine, and remarking “It’s an all-around crowd pleaser that has everything in balance.”  Whether you are a true bargain sleuth or simply don’t think your budget will allow for a great wine, the McManis 2013 Cabernet Sauvignon (California) simply rates as one of the best value wines of 2015.    Run, don’t walk, to pick up a case today!