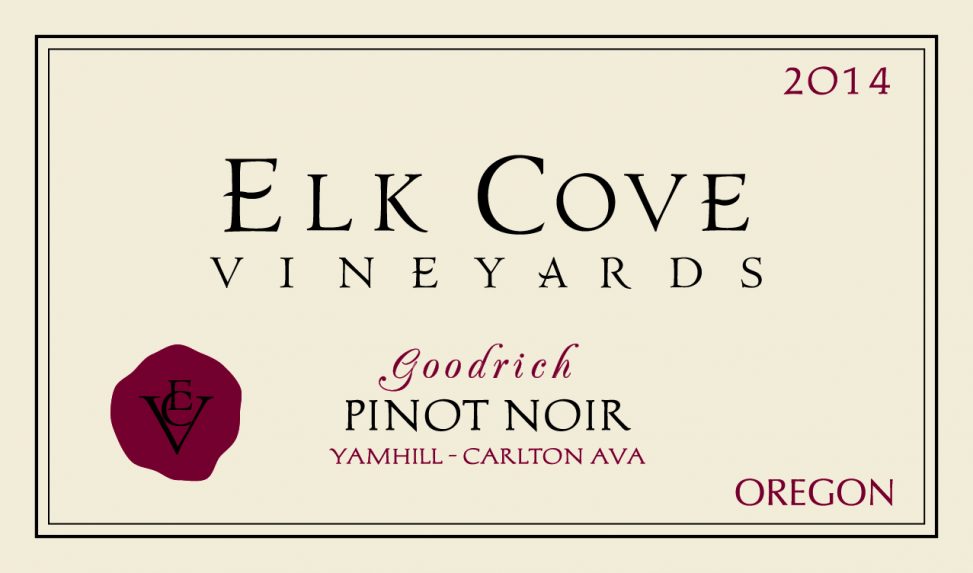 On a visit to Oregon’s Willamette Valley earlier this year, your humble Wine Bargain Sleuth and our festive group had the opportunity to taste many excellent examples of Oregon’s interpretation of Pinot Noir. The entire Willamette Valley community appeared quite excited about the 2014 vintage, noting that it was one of those rare vintages that had both quality and quantity of the fruit. After previously sampling several Elk Cove Pinot Noir offerings, I was anxious to taste more at the winery. The many Elk Cove 2014 Pinot Noirs that we sampled did not disappoint, among them the decorated 2014 Clay Court and 2014 La Bohemme. However, the absolute star of the excursion to Willamette Valley was the Elk Cove Goodrich 2014 Pinot Noir. Layered, polished, lengthy and enticing with its classic profile of cola, bing cherry and a spicy note combined with a hint of vanilla, this Oregon wine made my mouth come alive. No less an authority than Wine Spectator thought similarly, bestowing a stout 94 rating on the 2014 Goodrich Pinot, noting that the Pinot Noir was “Distinctly minerally, with a saline quality to the ripe raspberry and cherry flavors, coming together harmoniously against powdery tannins on the long, vivid finish….” Somewhere my late mother, whose family name on her mother’s side was Goodrich, is flashing her trademark world-class grin on this selection, no doubt. And what better way to honor my sainted mother than to have a glass of her family’s namesake Pinot on Thanksgiving? That’s a done deal. At a suggested retail, the 2014 Goodrich Pinot Noir is decidedly a Worth a Splurge Wine, but you wine sleuths will be hard-pressed to sample a better example of outstanding Oregon Pinot! Cheers!

Chapter 38: THANKSGIVING WINES FOR YOUR TABLE